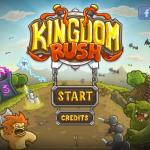 Your kingdom is threatened by a massive army of monsters. Let’s protect your land and people at all cost. Join Kingdon Rush at Friv 4 now! Kingdom Rush is another amazing strategy game which is brought to you by friv free Games. What’s it about?

The inhabitants of the city of the Southport have reported attacks by the highwayman and many monsters. You have to protect your land from the enemy attack by smartly building defensive towers along the road to stop them. There are four kinds of towers which are Archer tower, Barrack, Mage, and Bombard.

Archer tower strikes at your enemies from a distance while Barracks block and damage them. And Mages Guild mages cast armor piercing bolts at the monsters, ignoring any physical protection, Bombars ground enemies dealing areas damage. You also have the support of many powers to defeat your enemies in this fight.

No single one orc can pass through your defense. Let’s wipe all of them out of your land. You can also find other similar games at game friv 4, including http://www.friv-2018.net/ Enjoy! Instruction: Use your mouse to play this game.